The Music Sounds Better With You 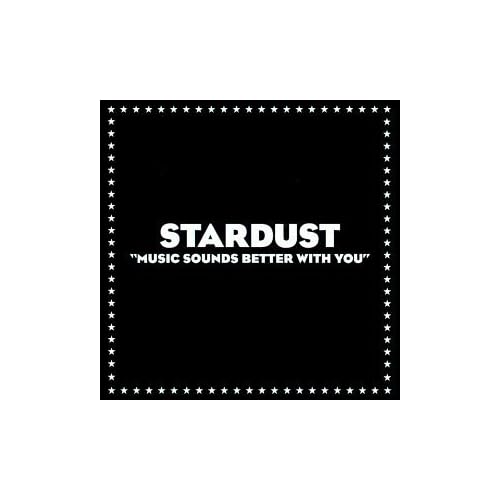 Oooooh baby…
I feel right.
The music sounds better with you.

Love might, bring us both together
I feel so good

I feel right.
The music sounds better with you.

I went through the trouble of finding this house anthem throughout the weekend only to find that…it wasn’t available anymore. I was rather disappointed but my friend Brian managed to find me a copy of the MP3. This track brought back some wonderful memories especially reminding me of 1999. Being in grade 9 at Britannia Secondary when all I cared about was house music, house music and more house music. This was the biggest house hit back in the day and I still feel that it’s one of the best French house tracks to date. This track was compiled by the group now known as Daft Punk but unfortunately, Stardust was only a shortlived project. Regardless, one heck of a famous track with sweet guitar riff samples and Benjamin Diamond’s vocal sample to create such a meaningful and emotionally-packed house track.

…to take Felicia out for a drive again.

And damn, the feeling was so satisfying, one man cannot express the joy with words. I finally started her up after a long nap in hiding for the winter season. I took her for a spin around the block and she feels just as good as new.

I missed her. And I look forward to seeing her more often. And like they say, “Good things come one step at a time…”

…So…Life has been quite the stalemate lately. Nothing exciting has been happening. Nothing new blooming. Just the usual same ol’ 9-5 routine. It sucks because it feels like I’ve wasted a good whole four months of my life for the year of 2007 but what can you do when things are literally, out of your bloody control? No matter how hard you try to get a grip on your own life or no matter how much effort you invest into changing something to your liking, in the end, somebody around the corner is bound to smash your knees until they break making sure you fall to the ground to be helpless and whatnot. At times like this, not even Jesus, Allah nor Buddah can save you.

I haven’t spoken to Felicia in over four months. I feel bad and I still think about her all the time but at the same time, I feel bad for not calling her up or putting the effort into communicating with her. What is the point of being, “friends” if I know when I want to be more than just friends with her? The answer is simple. I got shafted and catagorized into the Friends’ Ladder a la Ladder Theory. (Search Google. You’ll find it.) Partially my fault because I took too long to MYM or even then, she probably was never interested in the first place, but whatever. Why should I feel bad, anyways? I did my part and so did she. The question mark has become the period at the end of the sentence, but sometimes, I wished that I could rewrite that story again with a different ending.

Likewise, my other Felicia, is still idle. Uninsured. Boring. Inactive. Stale. The list goes on but I will not use Thesaurus.com to find other words to make myself look smart. Hey, it’s friggin’ 1:23am right now. What did you expect? But anyways, I finally got the bloody bypass vavle and recirculation pipe from that guy in Texas. It took a damn three whole fucking weeks to show up, for crying out loud. WTF, man! Oh well. Shit happens. Nonetheless, I finally installed it with the help of my co-worker, Hubert (thanks by the way) who had the tools I did not have to do the job. Mind you, I don’t have the full technical expertise to do the job. He also made me feel better by telling me, “Not everybody was born to turn a wrench, you know? etc…” It made me think, “Wow, he’s right. Maybe I wasn’t born to be an engineer and not everybody was born to understand how wireless networks work and why we can’t explain why the sky is blue…But enough of my mumbo jumbo before it becomes a cancer. Point is, he installed it and I hope to pass that fucking AirCare shit next week. I was hoping to get it done today but the battery was dead after not starting the car for over a month and a half. I realized this a little too late so Hubert gave me his battery charger which I plugged in but only to realize, (and fuck, what a bitch…) that I left it on 6v instead of 12v. Fawk! So, back to the drawing board. Until next week, we’ll see whether Felicia is ready for the summer or not…

I’m about three days to my one year anniversary trip to Austria last year. My OBB VORTIEISCard is expiring on April 20 (*har har har 4/20 har har har*) and I was hoping to use it in Europe but unfortunately, due to no particular reason, I decided not to go on a trip this month. Instead, I’m still deciding on whether I should go next month in May or in June. Both months are packed to a tight schedule as I have a few weddings and engagement parties to attend, but bloody hell, I need to get the hell out of here!

I’ve made up my mind as to where to go. The game plan is to avoid London by all means. I hate London. Always will and forever. I hate flying there because everything is so damn expensive and far away. Heathrow is like an hour and a bit away from city centre. Taking the Tube is 6GBP. Taking the Heathrow Express to damn Paddington Station is a freakin’ rip off. The Stanstead Express is an arm and a leg and mind you, food and drink prices are ridiculous! Oh, and Londoners suck. :P

But regardless, depending on how things go, it seems like I’ll be landing in Dusseldorf, Germany with LTU Airlines and then staying in Dusseldorf overnight. Next day on Air Berlin to Vienna, Austria for a day, and then a train ride from Wien Südbanhhoff to Krakow, Poland where I hope to meet up with my friend Matt’s brother and/or sister and even Hubert’s friend, Paul and Violetta, who are Polish and have friends in Krakow. I’d like to spend a few days in Krakow to check out the Polish republic. My main goal is to see and understand their culture and to explore the post-Soviet Communist life and society they once established. But perhaps I’m lying. I’m hoping to check out some hot Polish model-quality women and just party with them like there’s no tomorrow. But that itself is just an added bonus. I’d like to be able to find some cheap local handicrafts such as bracelets, precious stones, and necklaces to bring home for the ladies here in Vancouver. Guys – too bad for you. After Krakow, I’d like to visit Prague, in the Czech Republic.

There’s something that draws me to Prague and in general, the Czech Republic. I don’t mean to say it this way but there’s something strange and bizarre about that country in terms of my overall perception. Was it because Mr. Fitzpatrick (you asshole) portrayed the country to be as insane as he made it seem to be with tyrrant dictator Tito and his crazy Communist ideas? Or was it because it was once under the mighty Soviet empire? I think it’s a bit of both but most importantly, it’s because Felicia told me she got her necklace there and I’m determined to come back with one just as beautiful as hers, if not, better. And maybe I’ll save it for some day I meet a nice girl or just give it away to any random girl with no significant reason. The curiousity and conquest is killing me and I’m going to fulfill and end this hesitation once and for all.

After Prague, I don’t know where to go. Vienna? Graz? I’d love to go back. I’m sure Aisha is still there. And the Haubtbanhoff. And Postgarage. And Eva, the bar waitress who was so graceful enough to give me a nice lip-locked kiss and lots of vodka. Or maybe have some wienerschnitzel and kernölsalat. I miss all of that and I felt comfortable there. But maybe it’s time to get out of that comfort zone and visit a different city. I was thinking Budapest, Hungary, but I don’t think there will be enough time to fit three cities in, unless I go away for two weeks, which is, well, possible. We’ll have to see.

I like going away. It keeps me excited. Refreshed. Always on my toes. Something to learn every day. Nothing to worry about. Nobody to piss you off or tell you what to do…but that’s just one solution to escape reality. Bottom line is that we all have our own problems. It’s just a matter of how we deal with things (or not) and how we run away from our problems temporarily. I like travelling. How about you? I think you should tell me by e-mailing me – spam AT bcrdukes DOT com.

White girl Jenna at work is quite the interesting girl. I’m punching myself for even thinking this but her immaturity and blonde’ness is rather attractive. Mind you, she has the body of a supermodel and has a nice rack. She’s a true trophy girlfriend and I’d like to have her, but let’s face it. She has a boyfriend. You can only wish, right? Nonetheless, she’s wanting to get a boob job and she jokingly asked if I wanted to contribute to her boob-job fund. I offered to do so financially but in return, I get to touch and feel. Not sure if she was serious but I don’t like fake boobs whatsoever. Not to mention, she wants a lip piercing or whatever the fuck that emo shit is? Fuck, nasty. I hate that crap and I fully object but, it’s her life. It was even funnier when she said, “I’m only turning 20 soon!” made me laugh out loud. She’s one funny girl, but interesting enough for me to want her. But that will come another day. Or not.